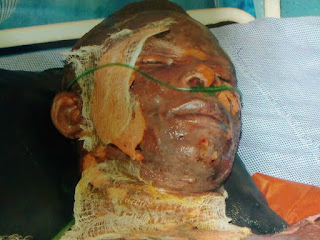 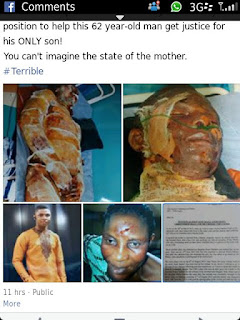 Nigerians, help get justice for the only son of Asuquo sprayed with petrol and lighted to his death by an enraged neighbour!
I really shed tears today as I listened to Matthew Asuquo passionately asking justice for his dead UNIUYO undergrad son.
Emmanuel was allegedly doused with fuel on Tuesday 11th August, 2015 by a neighbour - Jane Osasa - who had a brawl with his mum months earlier. The March 2015 fight left Mrs Asuquo the gorge (photo)
Same neighbour stabbed Mr Asuquo's niece last week on the 8th of August, 2015. The poor girl came visiting - simply to collect N4,000 for some exams from her uncle!
When Mr Asuquo couldn't take it anymore and reported the second stab case to the Area B police station, he was referred to the station close to his house - Ajeromi. The family stays at Ajegunle area, Lagos. Little did he know he was calling for more trouble!
That same night, Emmanuel was roasted alive...
The efforts of the police leaves nothing to be desired. I hold my comments for now.
This is imploring Governor Akinwunmi Ambode and Lagos state Commissioner of Police to intervene.
The suspect, Jane Osasa still walk free and in fact told Mr Asuquo yesterday - few hours after Emmanuel gave up the ghost that "more trouble is to come"
I hear she has the backing of her uncle - one Chinedu aka Danger.
I could only look into Asuquo's eyes today and mutter amidst tears "Justice will be served you!"

I have Mr Asuquo's contacts should you be in any position to help this 62 year-old man get justice for his ONLY son!
You can't imagine the state of the mother.
Sent from my BlackBerry® smartphone, powered by Easyblaze
Posted by AYODELE SAMUEL at 1:18 AM