Tension in Taraba over Speaker’s Death 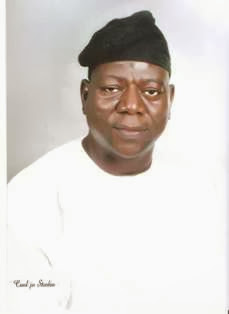 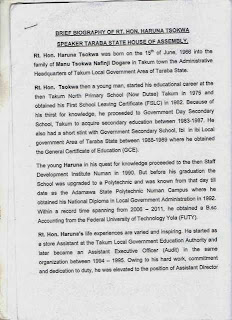 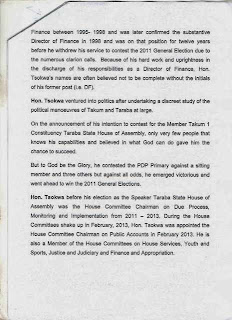 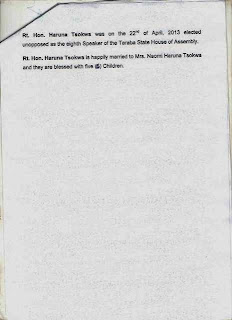 From Ayodele Samuel, Lagos & Yusha'u Alhassan, Jalingo
As Taraba state was thrown into mourning yesterday, tension enveloped the state over the true cause of the death of the State House of Assembly Speaker Hon. Haruna Tsokwa.
Tsokwa, aged 47 died in the early hours of Monday at the Federal medical Centre Jalingo after a brief illness.
The late speaker's family in a press statement signed by Rev. Martin Tsokwa announcing the death said the late speaker was survived by a wife and six children
Tanko Lodiya Kaura, spokesperson to the speaker confirmed to our reporter in Jalingo that Mr. Tsokwa collapsed on his way to the State House of Assembly, where he was expected to presided over the screening of some commissioner nominees.
The speaker was rushed to FMC where doctors confirmed him dead.
However a reliable source in the FMC said the late speaker suffered a Cardiac malfunction which he said might be caused by high blood pressure and hypertension.
But Family, associates and indigene of Takum local government where the late speaker hails from believed the true cause of his death is not been revealed.
Close sources in the family of the late speaker said a cover up is suspected.
A family source said the speaker prayed with his family before leaving for the state house of assembly, where he was expected to preside over the screening of commissioner nominees in assembly.
"He was hale and healthy when he left home, this morning (Monday), infact other members of the assembly and commissioner nominee were already seated in the chamber, waiting for his arrival before we heard of his death"
There were also rumour by some of the late speaker's supporters that Mr. Tsokwa was poisoned but they could not substantiate the claim.
The late speaker had been a staunch supporter of the state Acting Govenor Alhaji Garba Umar in the ongoing political crisis in the state for control of the state.
It could remember Mr. Tsokwa escaped death by the whiskers on September 19th when unknown gunmen attacked his convoy along the Jos- Abuja road where one the police man in the convoy sustained gunshot wounds during an exchange of fire between the policemen and their attackers.
Mr. Tsokwa attended Government Secondary School Ibi and Federal University Yola for his University and Secondary Education respectively.
The remains of the speaker have been deposited at the Specialist Hospital Jalingo.
Gov. Suntai, PDP mourns
Among early mourner to condole family and associates of the late speaker is the State Governor Danbaba Suntai.
Suntai in a press statement signed by his Chief Press Secretary Hassan Majinyawa describe the late speaker as a loss to not just Taraba state but Nigerian democracy as a whole.
A Politician of considerable standing, Hon. Tsokwa represented Takum 1 constituency in the state House of Assembly since 2011 and has performed creditably well.
Governor Suntai said the speaker died at a time when Taraba State is confronted with mild political crisis expected in a vibrant democracy such as ours.
"The late Hon. Tsokwa will be remembered for his ability to stand firm by any cause he believed in and his contribution to the democratic experience in Taraba State," Governor Suntai added
Meanwhile members of the Taraba State House of Assembly are at the private residence of the late speaker receiving condolences.
The first callers to the residence are the officials of the State Secretariat of the people's Democratic Party PDP led by the State secretary Bamanga Sambo Nguroje.
Condoling the members and the family Bamanga Nguroje said death is inevitable and that every mortal is waiting for his time.
He said Haruna Tsokwa died during the most trying moment in the history of the Taraba state and when his service were most needed but God that took him away loves him most.
The state PDP Secretary asked Tarabans to pray fervently for the repose of his soil and for those he left behind.
Posted by AYODELE SAMUEL at 5:12 AM No comments: