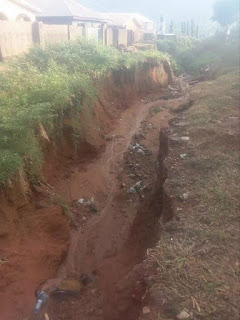 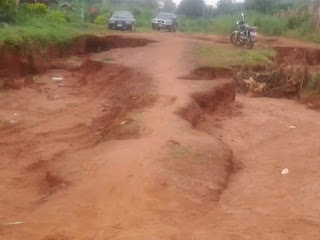 Following the imminent ecological disaster threatening Felele community in Lokoja local government area of Kogi State, the President General of the town, Mr Ibrahim Abdullahi has raised alarm over the erosion problem, calling on quick intervention by the government.

Rising from an emergency town hall meeting, the community noted that any further delay could see the community cut off by erosion.

Felele community, linking Okene/Abuja road has been washed away by erosion leaving ditches which cut off the major road in the community.

Also the community further pleaded with both the state and federal governments to come to their rescue by embarking on recovery of the road through asphalt and drainage construction.

Abdullahi, however commended the Lokoja local government, Kogi State and the federal governments on their interests in the community but pleaded with them to see the erosion menace as an embarrassment to the state.

Sent from my BlackBerry® smartphone, powered by Easyblaze
Posted by AYODELE SAMUEL at 1:38 AM 2 comments: