Igbo Traders in the demolished Owonifari Market, Oshodi yesterday are demanding for 20 billion naira from the Lagos State government for properties and goods lost to the demolitions.

The traders under the Igbo Traders Congress while protesting the demolition at the market denied allegations that Biafra agitators were holding meetings inside the market.

Speaking on behalf of the traders, Chibuzor Onugha said the demolition was targeted at Igbo traders in the state.

"We are being punished because PDP won in this area, they alleged that the we are holding Biafra meeting its all false, they just want to punish the Igbo's for political reasons," Onugha said.

The traders said the state government breached the Court Injunction against demolition, saying its heading to court to seek compensation against the 20 billion goods lost to the demolition.

He said the markets accommodated about 5000 traders while the government only provided slots for 600 traders at the new Isopakodowo Market.
However the Lagos State Government defended the relocation of traders plying their trade in Owonifari Market to the newly built ultra-modern Isopakodowo Market in Bolade-Oshodi, saying the action was taken in the overall interest of public good, safety and security.

Speaking during a joint press briefing addressed by the State’s Ministries of Information and Strategy, The Environment, Physical Planning and Urban Development, Local Government and Chieftaincy Affairs, and the Office of Civic Engagement, the Government said it constructed an alternative market stall for the traders which can conveniently accommodate over 600 shops and hundreds of kee Clamps, and agreed to subsidize payment by giving shops at the new market at a monthly give away price of N5, 000.

Commissioner for Information and Strategy, Mr. Steve Ayorinde said the traders were adequately notified before the exercise took place as required by law, and that government engaged with the leadership of the market severally before carrying out the demolition exercise on Owonifari Market.

While clarifying issues on the demolition which took place on January 5, 2016, Ayorinde said it was important for people to note that the issue of the market had been on for nothing less than ten years, adding that government had been engaging the leadership of the market to make them realize that it could no longer continue in the manner in which the market was being used.

He said unfortunately, the leadership of the market, in the last three years, refused to move despite the fact that the new market has over 600 shops apart from the kee clamps which takes the number of people that the market could conveniently accommodate to over a thousand all together.

Ayorinde said having been satisfied that government had provided a befitting alternative, Governor Akinwunmi Ambode through the Commissioner for Local Government and Community Affairs, invited the leadership of the market to the Executive Chambers and met with them on December 16, 2015, where he reiterated his plans for Oshodi and the need to move the traders to Isopakodowo which as at that time had been ready for a couple of years.

Giving a further background, the Commissioner said: “A few of them expressed certain misgivings but largely they felt that if their interest would be accommodated within the Isopakodowo Market, that they were willing and ready to move and on our part, we said that the discussion should be ongoing particularly regarding how much they would pay for each store within that market.

“After that, on Monday December 21, 2015, Governor Ambode went on a tour of that market area particularly at Isopakodowo in company with a few members of the Exco. Again, we met with the leadership of the market where it was eventually agreed based on the proposition by the leadership that what they were willing to pay for each shop at Isopakodowo was N5, 000.

“There is nowhere in Lagos where you will agree to be paying N5, 000 per shop not to talk of the central Oshodi, but the Governor agreed with them and we said we were ready to concede after which we now formally served them with a quit notice through the office of the Commissioner for Physical Planning and Urban Development,” he said.

Speaking further, Ayorinde denied allegation that many goods of the traders were destroyed in the demolition exercise, adding that such was far from the truth.

He said: “The intention of government certainly was not to destroy any goods and we did not destroy any goods because we believe that a good number of the traders, if not all, had moved because they were aware that they needed to move.

“Government, I should say, will not be blackmailed because we had done everything humanly possible and you know that the hallmark of this government has been compassion. It is a compassionate government.

“The intention was not to destroy the market or destroy properties or to make life inconvenient for them. We believe very strongly that Isopakodowo market is quite ideal; its a lot bigger store-per-store than where they had been removed now and the aim of government, as we stated earlier, is to ensure that that area of the market conforms with the type of image that we want Lagos to be, which is to return sanity to the place, to beautify the market, to construct a world class bus terminus around that place and to ensure that people who use that place on a daily basis – the commuters, traders, everybody enjoy what it means to go to a market in a mega city.

“We also believe that the exercise will largely reduce the gridlock that is associated with that area and then the criminalities that were rampant in that Oshodi. What we have done is in the interest of the generality of Lagosians,” Ayorinde said.

He added: “You will see from the reports that quite a good chunk of the traders acknowledged that they had been properly served and that they were ready to move which was why a good number of them, if not all, parked their things just before the end of last year.

“Along the line, we got intelligence report that during the holidays there were a number of criminal activities going on in the market and that the place was harbouring criminals and a number of untoward activities which of course necessitated the need to move immediately to safeguard lives, to safeguard properties and to ensure that there was no breach of peace which was what led to the demolition.” 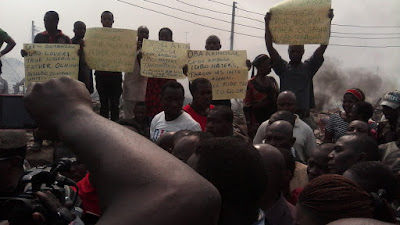 Posted by AYODELE SAMUEL at 12:09 AM No comments: