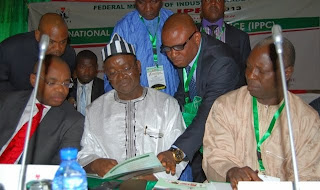 Stakeholders from Palm oil producing states, government agencies, corporate bodies and international partners are brainstorming on reviving the nations lost glory in the sector, Industry Correspondent Ayodele Samuel writes.
Palm production remains a very significant sector of the Nigerian economy, that has existed for a very long time. In the 1960s, Nigeria was the leading producer and exporter of palm oil, accounting for 27 percent of the global market but today the accolades suddenly disappeared.
Presently Nigeria ranks 26th in the world of palm oil production, a feet dishearten to stakeholders in the sector as local production hardly satisfy her local demand.
President Goodluck Jonathan while declaring the median  International Palm Produce Conference (IPPC) called on stakeholders in the sector to explore available investment opportunities in palm produce industry in Nigeria taking advantage of investment friendly climate and various incentives that have been put in place by the present administration.
The conference held in Uyo, Akwa Ibom State was jointly organized by the Federal Ministry of Industry, Trade and Investment and the Federal Ministry of Agriculture and Rural Development in collaboration with the National Palm Produce Association of Nigeria (NPPAN) has as its theme "Investment in oil palm and its derivatives, a panacea for economic growth and sustenance"
President Jonathan represented by  Minister of State for  industry, Trade and Investment, Dr. Samuel Ortom, pointed out that the aim of the landmark conference was to bring together global stakeholders to share ideas on new technological development and ways of improving the quality and availability of palm produce in order to maximize the growing investment opportunities in both domestic and international palm produce trade.
He expressed satisfaction with the timing of the conference because, according to him, it was holding at a time when the government has put in place all necessary policies to create enabling environment and framework for sustainable business and economic growth in agriculture commodities such as the oil palm where we have significant comparative advantage.
" as one of our cardinal goals under the Transformation Agenda, we are unrelenting in our effort to explore and unlock the enormous potentials of our agriculture. We are doing this through the rapid transformation of key agriculture value chains in order to meet our objective of adding additional 20 million metric tonnes of food to the domestic supply by 2015 and stimulate the creation of over 3.5 million jobs along the agriculture value chains. President  Jonathan noted that his government has identified oil palm as one of the important commodities and key drivers to promote and has intensified  efforts to provide enabling environment to accomplish this task.
Jonathan pointed out that Nigeria is an oil palm producing nation and was a foremost producer and exporter especially in the fifties and sixties, when the nation dominated the palm produce industry and became world largest producer and marketer between 1961 and 1965 contributing an average world production share of 39 percent. He regretted that we allowed this position to slip out of our hands.
He assured that his administration was resolved to return to the former glorious level of performance which is part of our overall commitment towards embarking on the sustainable expansion of the area under cultivation, promoting the replacement of semi wild grove with improved tenera planting material, upgrading the quality and number of palm oil mills and vegetable oil refineries in the country, and expanding our domestic and international market outreach.
Also speaking at the conference, Minister of Agriculture and Rural Development, Dr. Akinwumi Adesina represented by   Dr. Dickson Okolo said that the fortunes of palm produce industry in the country has increased through improvement in the supply of planting materials and effort to support the production of 9 million improved tenera sprouted nuts by the Nigeria institute for Oil Palm Research which are being raised into mature seedlings and distributed to smallholder farmers in 24 states.
He added that his Ministry will distribute 73 motorized harvesters at subsidized and affordable price, each of which is capable of harvesting 500-900 fresh fruit bunches per day. According to him, "We are currently fabricating better mills for small and medium scale plantations to be made available soon to farmers and processors to support the now expanding scope of fresh fruit bunch harvest".
The Governor of Akwa Ibom state, Chief Godwills Akpabio, represented by the Secretary to the state government, Mr.  Udom Emmanuel on his part said that investment in oil palm production would not only restore Nigeria pride and glory but would boast our economy and create jobs for teeming youths which in turn help in reducing unemployment statistics.
He added that his state has created enabling environment for investors and invested  heavily in oil palm production through assistance to oil palm producing plant across the state, provision of improved seedlings to farmers as well as soft loans and grant to women under the scheme call "Our Women  in Agriculture  Development Programme".
Posted by AYODELE SAMUEL at 11:03 PM No comments:

The Federal Government's introduction of a new national automotive policy, aimed at encouraging local production of new vehicles prompted Ayodele Samuel to ponder, in this report, on the ability of existing local auto makers to meet demand at a reasonably affordable cost and the expected implications for the nation's economy.