Why Everyone Is Talking About Sitcom "Living Together" 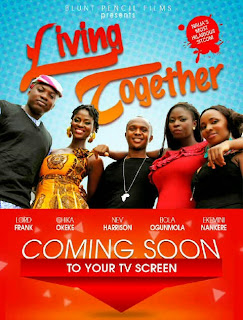 Most audience will agree that there has been a dearth of family-friendly, entertaining and educating sitcoms on the airwaves lately; but they need not worry anymore as Living Together is debuting on Nigerian TV stations soon all over the county.

LIVING TOGETHER is a production of actress/producer Betty Njoku Oluwome of Blunt Pencil Films and is directed by prolific Nollywood Director Afe Olumowe. The sitcom stars new but highly talented actors like Chika Okeke, Ekemini Nankere, Nev Harrison, Lord Frank, Bola Ogunmola. The producer Betty Njoku has in the past produced films like the Phobia, My Baby Boy, and Midnight Murder.

Living Together is a modern day urban sitcom comprising of five characters namely MIMI, TEMI, YOYO, CHUKS, and NAME POTASSIUM. All three ladies (Mimi, Temi and Yoyo) are individuals who came into each other's world as adults and took a decision to rent an apartment together which had them splitting the rent among themselves. With family members residing in other parts of the country, the ladies currently live in the big city and each is armed with a desire to move to a greater level in life and in love in no distant future.
Mimi and Temi are university graduates with certificates to show for it while Yoyo unfortunately had a slightly unstable upbringing as a result of losing her dad at a very tender age; this left her as a secondary school dropout. Yoyo is however a very competent fashion designer.

Chuks is Temi's cousin and a graduate from an institution in the eastern part of Nigeria. He is one with a questionable certificate (this he denies all the time).

Name Potassium is a young man who lives in the neighbourhood and comes visiting anytime and almost every time. He has a crush on Temi and believes he will someday end up marrying her.

Name Potassium although never mentions what higher institution he attended, he is suspected at some point to be a graduate from one of the nearby mental institutions, a claim which however, doesn't have a single proof.
LIVING TOGETHER is basically cut out to entertain a global audience through the comedy medium.

The witty characters oftentimes fight and argue over irrelevant issues but always come back at the end of the day to settle their differences.

This sitcom mirrors the modern day youth, their goals, desires, challenges and shortcomings.