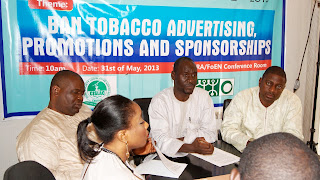 L-R: Barr Nurudeen Ogbara, Chairman, Nigeria Tobacco Control Alliance, Executive Director  of Civil Society Legislative Advocacy Center, Auwal Musa Rafsanjani and Director of Corporate Campaigns ERA/FoEN Akinbode Oluwafemi, at the World No Tobacco Day 2013 press briefing held in Lagos yesterday
As Nigeria joined the rest of the world yesterday to mark the 2013 World No Tobacco Day experts says tobacco kills nearly six million people every year in Nigeria, of which more than 600 000 are non-smokers exposed to second-hand smokers.
They also express concern over high smoking rate in the northern states and Lagos. experts have expressed concern over high smoking rate in the northern states and Lagos.
For that, the National Assembly has been urged to steps up work on the National Tobacco Control Bill (NTCB) with provisions to strengthen the ban on all forms of Tobacco Advertising, Promotion and Sponsorships (TAPS).
Environmental Rights Action/Friends of the Earth, Nigeria (ERA/FoEN) Director, Corporate Campaigns, Akinbode Oluwafemi  stressed this at a  media briefing in Lagos to Mark  the 2013 World No Tobacco Day yesterday.
He lamented that smoking especially among youths in Nigeria over the last few years has continued to rise. "A survey conducted in 2001 showed that 9.1% of Nigerian youths smoke cigarette. The figure by another survey conducted in 2008   jumped to between 17% and 27%. A recent survey in four local governments of Adamawa state put smoking rates among the youth at 33.9%."
Akinbode  said research shows that about one third of youth experimentation with tobacco occurs as a result of exposure to tobacco advertising, promotion and sponsorship. Worldwide, 78% of young people aged 13-15 years report regular exposure to some form of tobacco advertising, promotion and sponsorship.
"Bans on advertising, promotion and sponsorship are one of the most effective ways to reduce tobacco consumption, with countries that have already introduced bans showing an average of 7% reduction in tobacco consumption."
"WHO's report on the global tobacco epidemic 2011 shows that only 19 countries (representing just 6% of the world's population) have reached the highest level of achievement in banning tobacco advertising, promotion, and sponsorships.More than one-third of countries across the world have minimal or no restrictions at all.
He said Nigeria is not the only country where the tobacco industry is breaching bans on TAPS.
"Countries that are making strong progress in banning the last remaining forms of advertising include Albania, Brazil, Colombia, Ghana, Iran, Mauritius, Panama and Vietnam
"Here in Nigeria, the British American Tobacco Nigeria (BATN) which controls over 80 per cent of the Nigerian cigarette market has continued to undermine the treaty, not only through deliberate misinformation and illicit actions targeted at the youth, but also through brand stretching, point of sale adverts, diverse promotions and sponsorships. It has turned its so-called Corporate Social Responsibility (CSR) to a most visible tool for corporate brand campaign. Not only does BATN utilize CSR for far reaching media mileage, the participation of top government functionaries in its CSR events is a tacit government support of BAT's activities by government and a drag on attempts at effective regulation of the industry."
Spokesman for the Network for Accountability of Tobacco Transnationals,  NATT, Philip Jakpor, said the theme of year: 'Ban Tobacco Advertising, Promotion and Sponsorships' aims to draw the attention of national governments to industry activities that undermine the implementation of the WHO Framework Convention on Tobacco Control (FCTC) through Advertising, Promotion and Sponsorships.
He said the FCTC entered into force in 2005 and has since been ratified by more than 190 countries. Nigeria signed the FCTC in 2004 and ratified it in 2005 but its yet to domesticate the protocol.
"Ironically, that signing and ratification coincided with the same period that British American Tobacco Nigeria (BATN), controller of over 80 per cent of the Nigerian cigarette market started evolving new strategies to undermine the treaty, not only through deliberate misinformation but also through brand stretching – a form of advertising which targets mostly the youths.
He  recalled that the Advertising Practitioners Council of Nigeria (APCON) in 2004 issued a directive banning all forms of TAPS. "But BATN lived up to its bidding in evolving newer strategies to gain good press through an annual farmer's day event in Iseyin, Oyo State, where loyal farmers are giving electric generators, water pumps, knapsack sprayers, and fertilisers to keep them tied to its apron strings. This event is strategically targeted at painting the company as a socially-responsible company.
"Unfortunately, the participation of top government functionaries at the Farmer's event is tacit endorsement of BATN so-called CSR and it has exploited this to expand its activities to other rural communities beyond Oyo. In 2011 the company donated a N4.5 million cassava processing cottage industry to Odo-Oro community as part of what it claimed was a poverty alleviation initiative. A similar initiative was implemented in Ogun state."
He however called on the Lagos State House of Assembly to declare Lagos State smoke-free and prohibit smoking parties which BAT has clandestinely held in Ajegunle and Victoria Island in recent times.
Posted by AYODELE SAMUEL at 5:57 AM