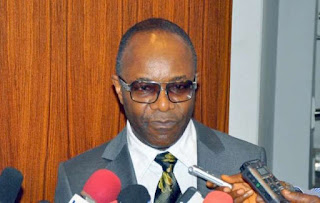 The Coalition of Civil Society groups have withdrawn an Ultimatum earlier issued to the Minister of State for Petroleum and Group Managing Director of the Nigerian National Petroleum Corporation (NNPC), Dr Ibe Kachikwu to organise a protest if the lingering fuel scarcity fails to abate.


National President of Coalition of Civil Society Organisations for Positive Change, Venatius Torkuma who spoke on behalf of the groups in Abuja on Wednesday cited the interest of Nigerians and national stability for calling off the planned protests.

Torkuma noted that the protests would be counter-productive if they end up creating instability that could further worsen the fuel crisis.

He said "We also have concerns that a mass action can be easily hi-jacked at a critical time like this since those behind the long fuel queues are desperate and would go to any length to have their way, which in this case is to ensure that they remove Dr Kachikwu as the Group Managing Director of NNPC and Minister of State for Petroleum for their own selfish reasons that have nothing to do with our desire to end the suffering of Nigerians.

"Our intention in planning the mass action is noble and we will not unwittingly play into the hands of those destroying the oil industry by helping them create a vacancy at the NNPC and Petroleum Ministry to install their puppet. If we allow this to happen then the tendency is for these heartless people to renew their hold on the oil industry in a way that will make Nigerians suffer more." Torkuma explained.

The group however appealed to Dr Kachikwu and President Muhammadu Buhari to speed up the reforms in the oil sector to ensure that Nigerians will never again have cause to spend days and nights on fuel queues once the current shortage has been addressed.

It urged that the Federal Government strongly think of measures to immediately cushion the hardship that citizens suffer particularly in the face of poor electricity supply that is concurrent with the petrol shortage.

The leaders of other organisations that were present as Torkuma spoke were Ahmedu Usman of Middle Youth Leaders Congress (MYLC); Labake Boboye, Executive Director-Stand Up for Nigeria (SUN); Ikpa Isaac of Centre for Social Justice, Equity and Transparency; and Khadijat Babangida from the Advocates of Social Justice for All (ASJA)