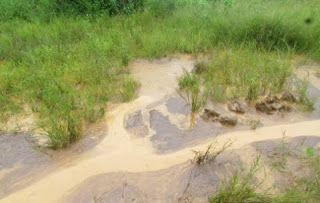 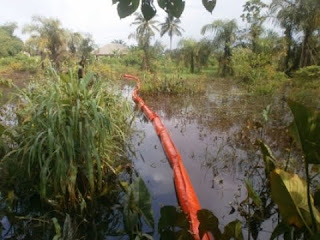 In 2011, Roland house was gut fire after an oil spill site near his
plank building was set ablaze, he lost some of his belongings, money and his
children suffered serious health complications, his fears remains as the spill
is coming back in 2013.

His new home is now surrounded by crude oil; with his family living helplessly
in danger of  its hazard.
'see what these people (oil companies) have
done to my kids''he said while expressing concern of the impact of
the spillage on his family, especially his new born twins.

Ikarama community blessed with oil facilities which  include wellheads, manifold and pipelines belonging to the Nigerian Agip Oil Company [NAOC] and Shell Petroleum Development Company [SPDC] , fishing, farming, hunting and weaving are some of the traditional means of livelihood of the people but spillage of crude oil remains a nightmare in the community.
Oil spillage is a regular occurrence in oil producing communities in the Niger Delta region, sometimes very close to living homes like the Roland's residents.
This time its fresh crude oil spilling from Shell's Okordia/Rumuekpe
Trunk line of Ikarama community.
Although Roland's family is closest to the affected swamp, other
families also live in close proximity.
Apart from the swamp, the gutter
around the environment is flooded with crude oil and flowing across to another
swampy communities with the help of heavy rains.
Apart from the crude oil spreading to cover farmlands, ponds, lakes and
even the Taylor Creek, Environmental Activists says oil companies often pay
youths to set fire to the area where the spill has occurred.
This can reduce the spread of the oil but has other detrimental effects
on the environment and residents.

"The first sign of the spill was when we
perceived the smell of fresh crude oil in the air, early Tuesday, 4th June,
2013. And, because of past experiences and strong current of the smell, we
[with her husband] tried to trace and we later discovered that the spill had
just occurred along the pipeline near us. Crude was just oozing out from the
ground and flowing into the swamp around,"Freeborn Roland wife,  Patience said.


"As you can see now, the
crude oil has spread all over the swamp. We that are living so close will
suffer the consequence again; you are aware how my children fell sick last
time. Even now they have not fully recovered. My twins are just about three
months of age and, you can imagine the risk of living within this immediate
environment highly impacted by crude oil again. We pray that this time around
they don't set fire on the impacted site and that Shell will mop up the crude
oil as soon as possible."

Residents of Ikarama condemned officials of Shell Petroleum for their
poor and nonchalant response to oil spills in the Niger Delta.

Washington Odoyibo the Public Relations Officer of Ikarama Community
Development Committee is also angry at the spill but blamed  Shell and third party activities.
"I was annoyed after I
got to the spill site and saw that some persons must have tampered with the oil
pipeline. It was very obvious; some newly dug mud was around the spot that was
spewing crude oil. My anger stems from the fact that our community will not
benefit any positive outcome from such spills occasioned by third party
activity. "Again, our environment has suffered severely from the negative
impacts of countless spills we have experienced. I was in Yenagoa when I heard
of the spill on 4th June, 2013 and, I visited the site within hours of that
information. It is very unfortunate. The swamp that the crude oil flowed into
is in my family land and, this is about the 3rd or 4th time that swamp is being
impacted; wasted.

"We used to fish in that
swamp from time to time. But these oil spills would not allow us to use it
anymore. I just hope Shell will mobilize to site and contain the situation. But
again, Shell should be held accountable for negligence because SPDC was
informed on the 4th about this incident but the company delayed action until
Friday, 7th June, 2013. They came to clamp it on Friday but they couldn't
conclude and they only succeeded in doing so on Saturday, 8th June, 2013. Now,
due to the fact that Shell failed to act promptly, the crude oil has spread all
over the swamp. May be that is what Shell wants; those who sponsored the spill.
Coming to spread boom in the swamp after the crude has covered everywhere is
hypocritical of Shell."
Asked the cause of spill, the
Odoyibo indicated sabotage. "Like I said
before, I do not have quarrels with the cause because it was obvious; my concern is Shell's response to the spill."

Right Groups demand actions
Amnesty International (AI) recently slam Shell over
claims that sabotage was responsible for oil spills in Nigeria, insisting that
the oil giant is to be blamed for the spills in Nigeria's oil rich Niger Delta
region.
Also Nigeria leading  Environmental Rights Action/Friends of the
Earth Nigeria (ERA/FoEN) called on Shell to immediately mop up,
clean up and remediate the impacted community.
The group urged  relevant
agencies of  Nigeria government to step
in to ensure that the impacted environment is properly mopped up and cleaned.
While calling on Shell to look inwards to identify staff and contractors
that sponsor sabotage and bring an end to the series of spills in Ikarama and
environs, ERA/FoEN advised Community dwellers to resist
temptation to engage in acts of sabotage and save themselves and their
environment pollution.

No spill is acceptable- Shell

"We work hard to reduce the number and volume of operational spills" Shell says on its official website.
A report on the spill obtained from Shell's website estimated the
volume of crude that spilled into the creeks 447 barrels. The company estimated
that 379 barrels of the spilled crude oil remained in the environment while 67
barrels had evaporated.
"Over the past five years,
from 2008 to 2012, just under a quarter of the oil that escaped from SPDC
facilities was due to operational causes such as human error or equipment
failure. In the case of operational spills the company negotiates compensation
with the landowner. It may also help by providing clean water and food, No
spill is acceptable and SPDC is working to improve its performance in this
area,"Shell said.