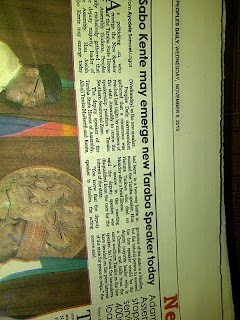 As politicking on who emerge the New Speaker of the Taraba State House of Assembly thickens, Peoples Daily exclusively gathered that the deputy majority leader of the Assembly, Hon. Josiah Sabo Kente may emerge today (Wednesday) as the new speaker.
Peoples Daily correspondent gathered that a consensus was reached last night by members of the state Assembly to retain the speakership position in Taraba Southern Senatorial Zone.
The deputy speaker of the Taraba State House of Assembly, Alhaji Tanko Maikerifi and Kente, had been in a two-way battle to succeed the Taraba speaker, Hon Haruna Tsokwa who died on Monday after a brief illness.
A source in the meeting said the deputy speaker was disqualified from the race for the interest of the state.
"You know that the deputy speaker is Muslim, the acting governor of the state is a Muslim, but the natural person to succeed the late speaker would be the deputy majority leader who is a Christian and hails from the same southern Taraba as the late speaker. So I think the lawmakers have decided on the pure interest of the state for peace to reign," the source said.

http://peoplesdailyng.com/sabo-kente-may-emerge-new-taraba-speaker-today/
Sent from my BlackBerry wireless device from MTN
Posted by AYODELE SAMUEL at 6:11 AM