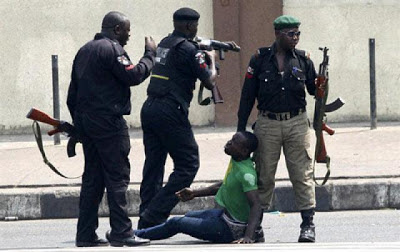 These days, Nigerians are convinced that the easiest and fastest suicide attempt is to argue with an arm carrying police officer. Lives are worthless in the sights of many cops, while numerous killings by triggered happy officers are yet to be resolved.

My earlier thought was to write on the rise in social violence among us (youth), when I got a message about how an Okada rider was shot dead by a mindless police officer in Ikeja area of Lagos.

While still grunting on this, the following day the senseless  killing had  moved to Muritala Muhammed International Airport, where another young man was shot dead by a police officer after a hot argument between both.
A friend who witnesses the scene said he was shock to the bones but take to his heels to avoid being the second victim of the unwholesome incident.
Same time last year at the wake of subsidy protest in Lagos, happy trigger  Segun Fabunmi,  Divisional Police Officer of Pen Cinema, Agege, had shot promising Ademola Abe, a 28 year old fashion designer till date  justice is yet to be served and I doubt if the policeman is still in custody or walking a freeman.
Abe might be luck unlike other unfortunate victims, his statue now stands in at Yaya Abatan area of Ogba in Lagos where he met his untimely death.
Also in Nasarawa State ,two youths have been sent to early grave by the police and I wonder if we should fold our arms I watch police officers to continue killing innocent souls with bullets bought to protect us and our properties while criminals rules our streets. 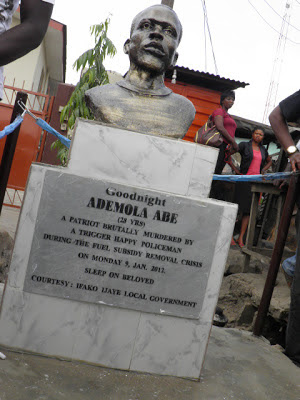 The reported police killing this year alone are more than 10 (as at time am writing this piece )and we are just a few days into the new year.
The police authority needs to address this issue urgently, its beyond sitting in Abuja to launch a code of conduct that a cadet or recruit will never get to read nor understand.
Police officers on the street needs re-orientation, our arms (because there are brought by tax payers money) are now terrorizing us in the hands of police, policing  is not about been ruthless or transfer of whatever  aggression to innocent citizens.

Its about communicating and partnering with the public to make the society safer for us all.

Lastly Fabunmi, yes  'the late Abe's killer cop' should be brought to justice, to serve as deterrent to other 'I will shot you nothing go happen' officers, we have them many among our cops.
Posted by AYODELE SAMUEL at 12:12 AM